This unit has provision for playback of Alert, Evacuation and chime tones as well as an alert and/or emergency message. When connected to a paging system amplifier, building occupants can be alerted and/or evacuated in the event of an emergency e.g.: fire, gas leak, bomb scare, earthquake. The Alert, Evacuation, Bell, and Emergency Messages are all MP3 based and stored on a Micro SD card which is accessible from the front of the unit. The Alert, Evacuation and bell tones and cancel function are triggered by the front switches, or by the rear terminal contacts for remote activation i.e. a clock, remote switch or optional A 2078B and A 2081 remote wall plates. It features 24V DC switched outputs which are enabled when the Alert, Evac or Chime tones are triggered. It is powered from a 24V DC source (plugpack supplied) and features a line out facility and MP3 based Message Voice Over.

We offer 10 years warranty on this product from its date of purchase. This is available from Altronics stores, online purchases or Altronics resellers. In accordance with our full warranty terms we will repair, replace or refund if goods you have purchased from us are defective. 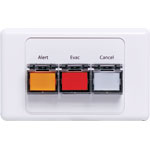 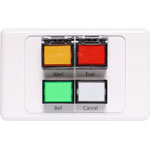